The La Trobe Support for Decision Making Practice Framework Learning Resource
This video talk introduces you to Step 6.
In order for the main or overarching decision to be reached, it may need to be broken down to its smaller, associated decisions.
​This is shown as a picture in Figure 5.

Figure 5 The overarching decision and its associated decisions

In some instances, you will need to record a decision as you might need to pass it on so that other people can act on it.
This can be done in-house, or informally, with the use of a recording template. The completed template can then be stored in the person’s individual folder.
A blank recording template is provided for you in the Resources section so that you can use it yourself. An example of a completed recording template is also provided in the Resources section.
​In other situations, you will find that certain decisions will need to be recorded formally. This would be in cases where the decision has been made by an authority figure such as a state trustee or other authority figure.
​​This video shows an example of  reaching the decision and associated decisions.
Watch the video and then answer the questions. Write in the downloadable workbook located in the Resources section. ​​
​In the table provided, record as many associated decisions that you can think of which will enable the overarching decision to be reached.
​An example has been provided for you. Write in the downloadable workbook located in the Resources section. ​​​

Select the button below to learn about Step 7 Implementing the decision & seeking advocates if necessary. 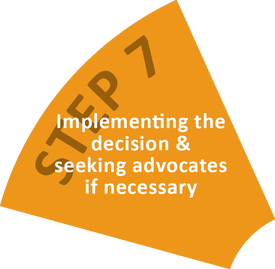